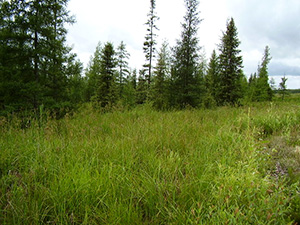 WCEC completed a unique project in a northern Minnesota peat bog that required the remediation and restoration of contaminated wetland sediments. A derailment of 64 train cars loaded with taconite impacted approximately 120,000 square feet of coniferous bog wetland adjacent to the railroad right-of-way. A small amount of diesel fuel was also released during the derailment. WCEC was on-site immediately after the derailment and evaluated the impacts to the site wetland sediments. WCEC coordinated with the St. Louis County Soil and Water Conservation District, Army Corps of Engineers (ACOE) and the Minnesota Board of Water and Soil Resources to determine a remediation strategy. WCEC designed a remediation and restoration plan based on consultation with the University of Minnesota Duluth, Natural Resource Research Institute’s Peat Program.

The diesel fuel contaminated sediments were evaluated with a Dutch mud auger and field screened with a photoionization detector. Contaminated sediments were excavated along with the removal of the taconite. The extent of taconite discharged into the peat sediments was determined through total station survey and soil probes. The restoration plan included; harvesting live donor sphagnum, excavation of the taconite fill, prepping the restoration areas with a peat substrate, thin spreading the live sphagnum, and spreading mulch. WCEC developed a five year monitoring plan to observe the percent of sphagnum diaspore establishment, identify all plant species growing within the restoration areas, and identify and control any invasive species. As of the 4th annual monitoring event completed in 2013, sphagnum establishment was over 50 to 70% of the total ground area and a high diversity of native plant species (46+) were observed in the restoration areas. Three non-native species were observed in the restoration area during this monitoring period; however, total areal cover of invasive species was less than 1 percent. After WCEC submitted the 4th Annual Monitoring Report (August 2013), the ACOE completed a compliance inspection in October 2013. The ACOE determined that all accidental fill material (taconite) had been removed and the wetland had successfully been restored. As a result of WCEC’s restoration efforts, a site closure letter was issued by the ACOE a full year ahead of schedule.