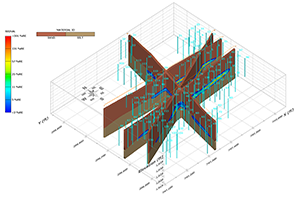 WCEC assisted the MPCA emergency response team and the St. Cloud Fire Department in conducting an emergency assessment and response plan. It was critical to determine the vapor intrusion pathway and the source of the vapors. The nearest potential source of petroleum contamination was underground storage tanks (USTs) located at a retail gasoline station located over 200 feet from the apartment building. Because utility lines can provide a migration route for vapors to travel long distances, the utility lines between the gas station and the apartment building were inspected to determine whether there was a completed vapor pathway. Impacts were not detected during inspection of the utilities.

Photoionization detector (PID) screening was conducted throughout the apartment building to locate the entry point for the vapor intrusion. The highest PID readings were found in one of the ground floor apartments. A section of the carpet was removed to reveal a seam in the concrete along which the highest PID readings were detected. WCEC concluded that vapors were likely entering the apartment building through cracks and seams in the concrete slab at the ground level. The ground-level apartment in which the highest PID readings were detected was evacuated and used as a staging area. WCEC worked with the MPCA and St. Cloud Fire Department to establish a continued vapor monitoring plan and criteria for re-occupancy of the apartment building. WCEC simultaneously developed and implemented an interim corrective action plan to immediately mitigate the vapors and prevent further vapor intrusion. Additionally, the source of the vapors had to be confirmed and additional evaluation and assessments of other buildings in the area had to be completed. Once the source of the vapor contamination was confirmed, WCEC could develop an appropriate remediation strategy.

WCEC coordinated every aspect of site characterization and remedial action on an extremely accelerated schedule, while retaining regulatory approval and stakeholder confidence. Tasks performed by WCEC are provided in the following sections.

WCEC designed an interim corrective action to provide sub-slab depressurization through an emergency soil vapor extraction (SVE) system. WCEC completed an emergency utility locate and contracted a private utility locater to mark underground utilities prior to installing the emergency SVE system. Vapor extraction wells were installed around the perimeter of the apartment building and within the apartment that had been evacuated. Vapor monitoring points were installed to measure vacuum and influence of the system beneath the apartment to ensure the efficacy of the system.

WCEC obtained appropriate permits, insurance documentation, and access agreements as the project progressed throughout numerous properties. WCEC maintained public stakeholder awareness and confidence, as well as attended to stakeholder requests throughout the investigation and cleanup.

Vapor surveys were completed in buildings adjacent to the apartment building including the commercial mall where the gas station is located and buildings surrounding the gas station. The surveys showed impacts in several locations within the commercial mall and in a neighboring professional/medical services building. WCEC designed and implemented additional interim corrective actions which included the installation of SVE systems at all of the impacted buildings. Vapor monitoring points were installed in conjunction with the systems to measure vacuum and influence of the systems.

WCEC worked with the MPCA Petroleum Remediation Program (PRP) to develop a continued monitoring program to keep all stakeholders apprised of the vapor monitoring results.

Historical information of the area indicated that the gas station at the commercial mall was the most likely source of the petroleum vapors being detected. Testing of the tanks confirmed that there was a release from one of the tanks. The tank was immediately pumped out and taken out of service. Receptor-specific vapor samples were collected from the buildings located in close proximity to the release.

To mitigate the vapor intrusion conditions in nearby buildings, WCEC developed a plan to quickly and concisely determine the extent of the vapor source area, believed to be resulting from a widespread light non-aqueous phase liquid (LNAPL) body. Traditional soil sampling from soil borings would introduce unacceptable delays in data acquisition, and the use of a membrane interface probe (MIP) may determine where the extent of the vapor plume, but would not support an adequate contaminant fate and transport model of the LNAPL body.  Therefore, WCEC developed a more aggressive investigative approach.

Under the direction of the MPCA, WCEC completed over 140 Laser Induced Fluorescence (LIF) borings combined with electrical conductivity (EC) measurements over an area of approximately four city blocks. Data from the LIF and EC survey were used to develop a site conceptual model, based on a fully three-dimensional visualization of the extent and magnitude of the actively migrating LNAPL body. The data revealed that the LNAPL body movement was controlled by a compact, gently sloping silt unit that underlies coarse sand. Flow path analysis of the silt surface confirmed that the axis of LNAPL migration was coincident with the calculated silt surface flow vectors.

WCEC used the plume data to develop a corrective action design to address the LNAPL body, the source of the vapor contamination plume.  WCEC’s staff of engineers and geologists designed three separate soil vapor extraction (SVE) systems to remediate the LNAPL plume. Each system is equipped with a backup vapor control system designed to turn on in the event that the primary system fails. WCEC oversaw the excavation of the existing underground storage tanks (USTs), and the installation of new USTs.

WCEC quickly and successfully implemented the interim corrective actions at and around the apartment building which allowed the affected residents to return to their apartments quickly and in turn, reduced the client’s costs for temporary housing.  WCEC worked with MPCA staff to successfully complete an accelerated investigation that created minimal interruption of businesses and residences.  WCEC also succeeded in working with multiple stakeholders, including the City of St. Cloud, and numerous businesses, property owners, and developers.  The three remediation systems are currently operating and removing volatile petroleum compounds with no downtime.  WCEC continues its remediation system performance monitoring and site monitoring program which has shown that there have been no further vapor impacts to any of the surrounding buildings.