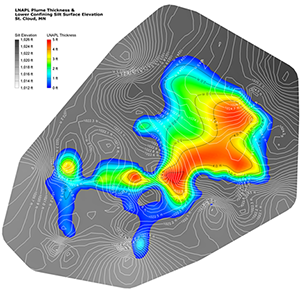 Under the direction of the MPCA, WCEC completed a hydrogeologic investigation including contaminant fate and transport modeling as part of an emergency response/accelerated site investigation at a retail petroleum distribution facility in St. Cloud, Minnesota which had experienced a catastrophic petroleum release from a UST system.

The 2D and 3D visualizations generated by WCEC using MVS software revealed a lower confining silt aquitard unit with a gently dipping gradient that appeared to be controlling horizontal and vertical migration of the LNAPL.  Flow path analysis of the silt surface performed in AutoCAD Civil 3D confirmed that the axis of LNAPL plume migration was coincident with the calculated silt surface flow vectors. This information was crucial for project team leaders as the project transitioned from the emergency response into the remediation and cleanup phase.