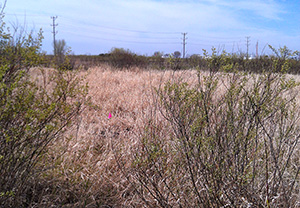 For many years the Kinder Morgan Cochin Pipeline had provided a direct link between propane production in Alberta, Canada to the United States propane market. Cochin was the largest single source of propane supply into North Dakota (29%) and Minnesota (38%). In addition, Cochin supplied propane markets in southern Wisconsin and Iowa. In 2013, the terminal facility located near Benson, Minnesota received 42% of the total Cochin shipments. However, in March 2014, this pipeline stopped shipping propane and began to ship a different product in the reverse direction.

During the summer of 2014, WCEC partnered with a local petroleum company to complete a wetland delineation/determination within the footprint of a proposed rail spur line adjacent to the existing propane distribution terminal near Benson. The goal of the rail spur project was to create a receiving and distribution supply point for liquid propane gas in west central Minnesota. With the existing storage tanks and load-out facilities at the Benson terminal, the distribution side of this project was already in place. The installation of a rail offloading facility was aimed to facilitate the in-shipment or receiving side.

After identifying wetlands on the property, WCEC participated in an on-site meeting with the client, county (local governing units (LGUs)), state (MN Board of Soil and Water Resources (BWSR)), and federal (Army Corps of Engineers (ACOE)) representatives to determine the best way to complete the rail spur project while avoiding and/or minimizing impacts to wetlands.

The potential shortage of propane that developed after the Cochin Pipeline terminated service created public safety (winter heat) and economic (agricultural uses) risks in Minnesota. In order to supply a significant volume of propane before the fall/winter of 2014-2015, all approvals had to be obtained and the proposed facility constructed before demand increased. In addition to the support from LGUs, BWSR, and the ACOE, this project was aided by the Minnesota Department of Commerce, members of the State and Federal Congress, and the Governor of Minnesota. Due to the efforts of this multi-agency team with contributions from WCEC, the Application was approved in record timing.